Is cycling only a local issue? This claim is often used to argue that cycling does not fit into the theme of the Trans-European Transport Network (TEN-T). However, a closer look at the TEN-T reveals that the majority of traffic on the existing road and rail networks is local or regional. At the same time, international cycle traffic does exist and, in some cases, exceeds car or rail passenger traffic on sections of the TEN-T.

1. Recognition of EuroVelo, the European cycle route network, as another TEN-T network - in addition to existing networks such as road, rail, or inland waterways.

2. Integration of cycling into projects on other networks: When building or upgrading a railroad line, for instance, the potential for cycling along and across the line should be evaluated, and key elements, such as bridges and tunnels, should be integrated into the project. 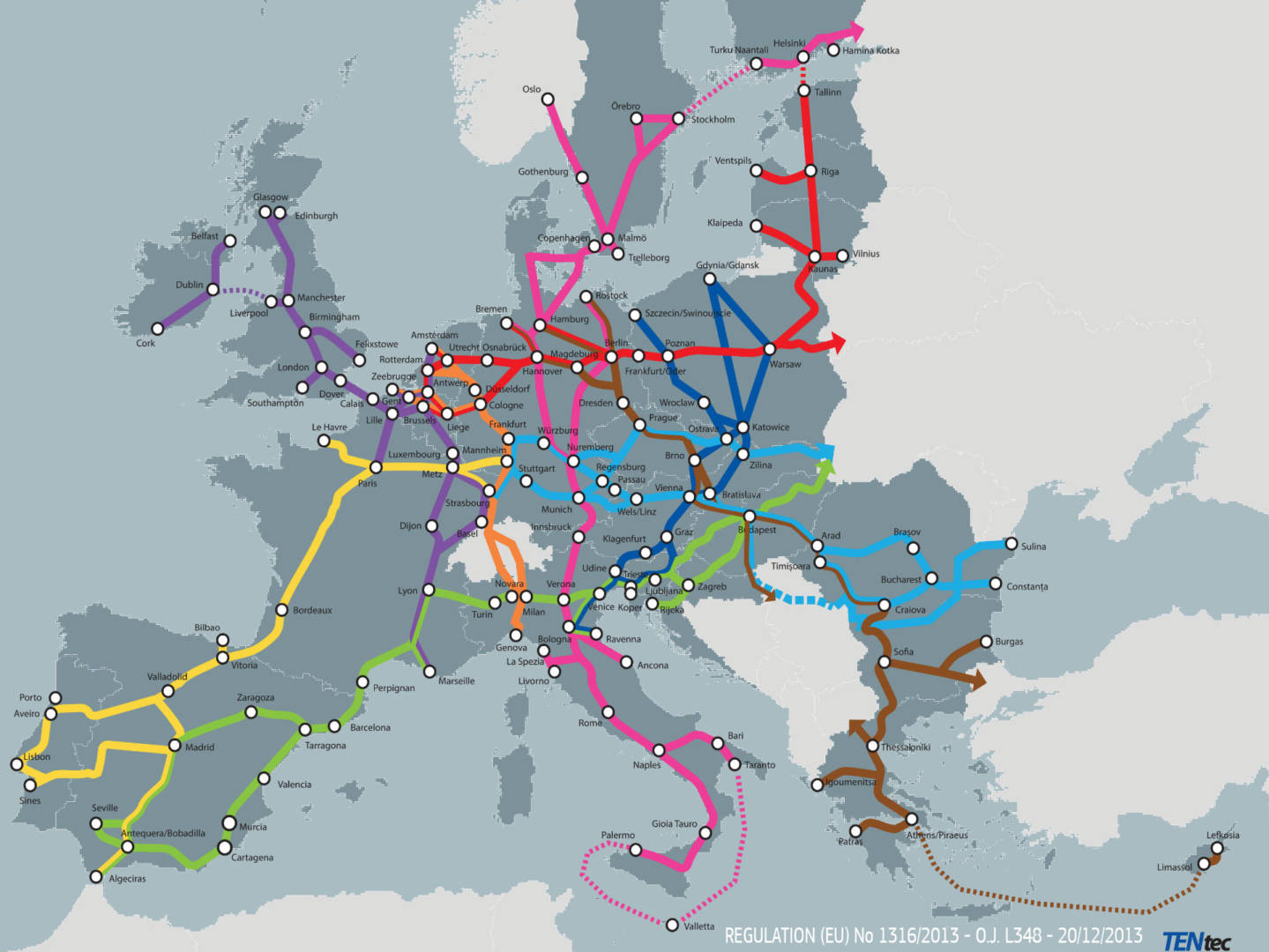 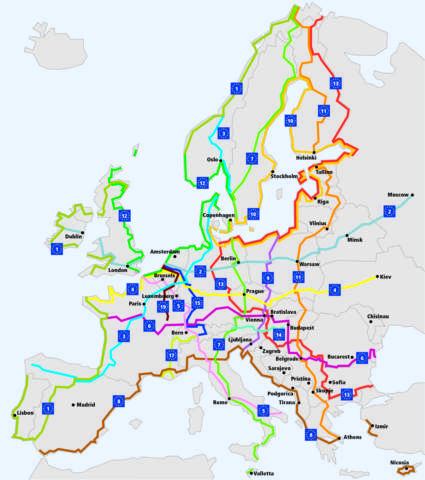 You may recognise the striking similarity between some of the TEN-T’s so-called Core Network Corridors (on the left) and the EuroVelo network’s 17 routes (on the right).

Opponents of the idea claim that TEN-T networks serve long-distance traffic and cycling is only for short distances. But what are the facts?

1. Most traffic on the TEN-T road network consists of local and regional trips!

Looking at the traffic measurements on any of the TEN-T corridors, it is easy to notice that the volumes vary greatly along the same route, by a factor of 5, 10, or even 50 in some cases. The volumes are highest in agglomerations, significantly lower on intercity sections, even lower on internal EU borders, and lowest at external borders.

For example, on the A2 motorway in Poland, the annual average daily traffic varies from 13,935 (between interchanges Rzepin and Torzym) to 61,932 (ring road of Poznań) and 75,156 (west of Warsaw). The section of the same TEN-T North Sea – Baltic core corridor leading to the border crossing with Belarus serves only 1,670 vehicles per day (1).

On the A4 motorway in Poland, which is the first completed core corridor in the country, crossing Poland’s southern part from the German to the Ukrainian border, the annual average daily traffic varies between 1,889 vehicles per day (Przemyśl – Korczowa) to 100,983 vehicles per day near Katowice – 53 times more (2).

Across Finland, on the Scandinavian – Mediterranean core corridor, the volume of traffic varies between 2,682 vehicles per day at the Russian border and 78,500 vehicles per day (29 times more) in Vantaa, in the agglomeration of Helsinki (3).

The comprehensive TEN-T road network also includes sections with even less traffic: For example, the northernmost part of national road 4 in Finland carries only 305 vehicles per day, while national road 5 next to Karhujärvi sees 367 vehicles/day, and national road 89 features 377 vehicles/day (4).

2. Most of the TEN-T rail traffic is local or regional as well!

The same observation can be made for passenger traffic on the railroad network. Only one train per hour crosses the Belgian – Dutch border between Essen and Roosendaal, part of the North Sea – Baltic and North Sea – Mediterranean core corridors, for instance (5). In contrast, seven to ten trains run every hour on the same line between Mechelen and Brussels (6), and as much as 25 trains per hour serve the section between Schiphol Airport and Amsterdam (Centraal and Zuid) (7).

Similarly, only four trains per day cross the Polish – German border between Rzepin and Frankfurt (Oder). On the same line, the traffic grows to 40-50 trains per day between Sochaczew and Warsaw or between Erkner and Berlin.

3. Many of the most expensive TEN-T projects, which absorb a big share of CEF funding, are located in big agglomerations – where the TEN-T corridors are dominated by local traffic.

As local and long-distance traffic cumulates here, these sections require more capacity, i.e. wider motorways, with three, four or even five lanes in each direction, and quadruple rail tracks. Furthermore, construction in urban areas is generally more expensive due to land acquisition, more conflicts with existing infrastructure, and the need of noise protection.

Integrating high-quality cycling infrastructure into these TEN-T sections can release congested sections of long-distance routes from short-distance traffic. Providing a cycle highway is usually cheaper than adding motorway lanes for short-distance commuters, for instance. A study undertaken by Dutch consultancy Goudappel Coffeng concluded that building 675 km of cycle highways would reduce the time spent in congestion in the Netherlands by 3.8 million hours per year. A further 9.4 million hours of car travel time could be saved each year if the use of electric bicycles increased. Similarly, a traffic demand study in Germany’s densely populated Ruhr area estimates that the 101-km long cycle highway RS1 can remove up to 50,000 motorised vehicle journeys. The total cost of RS1 is put at €180 million (€1.8 million/km), which is significantly more cost-efficient than motor-vehicle road projects.

Let us look at some of the numbers from the automatic bicycle counters located on cross-border sections of the EuroVelo network.

More than 750,000 cyclists crossed the Polish-German border on EuroVelo 10 along the Baltic coast in 2019 (9). The number of cyclists on this section often exceeds 7,000/day in summer. This number is close to the daily volume of cars at the nearest motorway in the TEN-T core corridor: 9,524 on the Kołbaskowo - Pomellen border crossing. It is up to four times higher than on some parts of the TEN-T road network in the same country, such as on the Kukuryki border crossing, part of the North Sea - Baltic core corridor, where 1,670 cars cross per day.

The cycling volumes in international traffic are naturally lower than within and around large cities. But this is not much different from the situation on roads and rails, as shown above.

The claim that cycling is a local issue and therefore does not fit into the TEN-T theme is flawed. International cycle traffic is a fact and sometimes exceeds car or rail passenger traffic on sections of the TEN-T. Moreover, it is wrong to assume that the existing TEN-T is mostly used for international traffic. In fact, most of the traffic on trans-European roads and railway lines is local or regional. International cycle routes such as the EuroVelo network are important for the development of tourism. But they can also provide a significant boost for local and regional cycle networks, serving as their backbone and quality benchmark.

Find out more on ECF's dedicated webpage on TEN-T, EuroVelo and cycling.