The ECF has published an updated, dedicated position paper on the Trans-European Transport Network (TEN-T). The document highlights the ECF’s two main demands in this area: Integrate EuroVelo into the TEN-T and integrate cycling infrastructure into all TEN-T infrastructure projects! 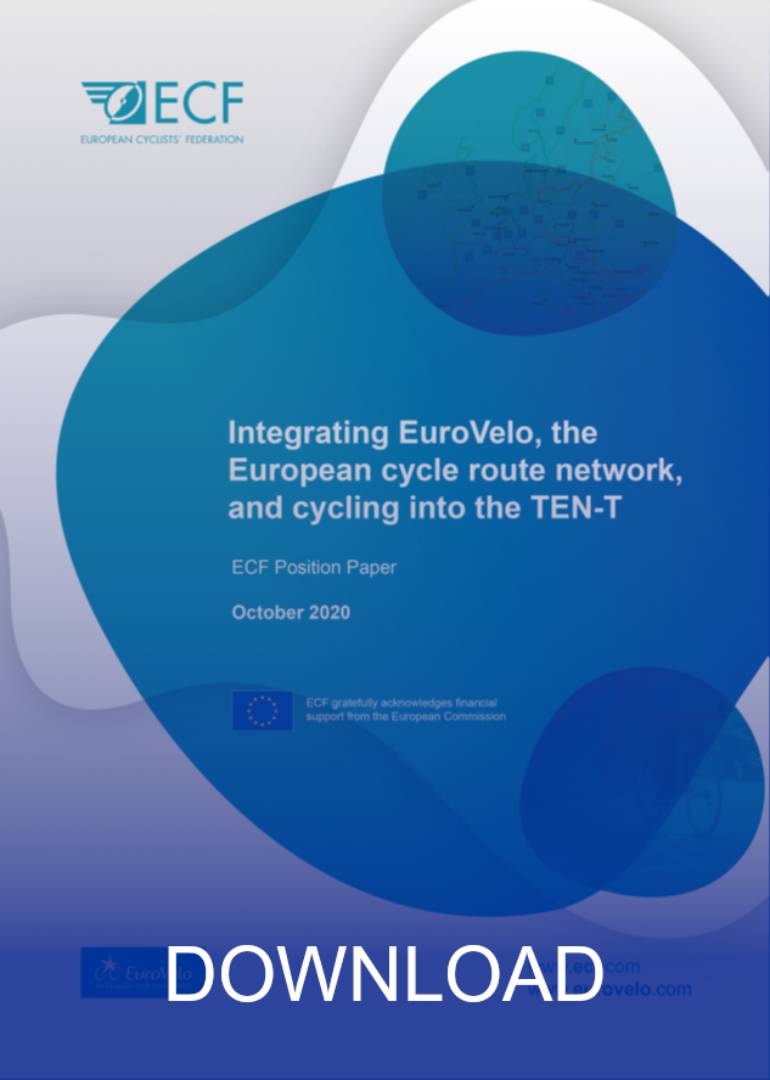 The TEN-T is the EU’s flagship transport policy. It is a network of roads, railway lines, inland waterways, maritime shipping routes, ports, airports, and railroad terminals in Europe. The ultimate objective of the TEN-T policy is to close gaps, remove bottlenecks and technical barriers, as well as to strengthen social, economic and territorial cohesion in the EU. The Core TEN-T Network connects the most important nodes and is to be completed by 2030, while the Comprehensive Network covers all European regions and is to be completed by 2050.

The European Commission launched a review of the TEN-T policy in April 2019. Transport in Europe is facing unprecedented challenges regarding sustainability, user-driven mobility and technological progress, as well as following the coronavirus outbreak. These challenges call for new solutions to ensure a future-oriented, sustainable transport system.

The ECF considers cycling a crucial element of these future-oriented solutions. A direct reference to cycling and EuroVelo was included in the TEN-T Guidelines for the first time in 2014, but this is not sufficient.

A significant increase in the number of trips made by bike is crucial for achieving the goals and targets of the European Commission. It will be needed to help meet the objectives of the European Green Deal to reduce the transport sector’s greenhouse gas emissions by 90% by 2050. Cycling must therefore play a central role in Europe’s transportation network and, by extension, the TEN-T.

The ECF proposes two measures to ensure cycling is better integrated into the TEN-T:

1. Integrate EuroVelo, the European cycle route network, into the TEN-T. EuroVelo should be included as a fully-fledged TEN-T network alongside the networks for other modes. As the European cycle route network is already well-established, its integration into TEN-T would be easy to achieve and entail tremendous benefits for the whole policy.
2. Integrate cycling infrastructure into all TEN-T infrastructure projects. The potential for cycling traffic in the area covered by the respective projects should be evaluated and necessary elements of cycling infrastructure should be integrated into project planning, design, and construction. This should include the following measures:

The costs of not including EuroVelo and cycling in the TEN-T are high. For instance, elements of the TEN-T network often act as a barrier and obstacle to the development of active mobility in cities and regions that are investing in cycling. Motorways and ring roads can cut off suburbs from core urban areas. Fully including EuroVelo and cycling in the TEN-T would make investing in cycling infrastructure easier and cheaper, without the need of expensive follow-up construction works where cycling infrastructure is disrupted through TEN-T projects.

The new position paper contains arguments, insights and examples, highlighting the benefits of including EuroVelo and cycling in the TEN-T. It also provides an overview of the various calls by member states for a European cycle-route network, such as the Graz Declaration or the Declaration of Luxembourg. The review of the TEN-T guidelines represents an opportunity to level the playing field for transport modes. The update can correct the limitations of the current approach and foster an unprecedented growth in cycling infrastructure across the EU.

Please do not hesitate to download the new ECF TEN-T Position Paper and to contact us if you have questions or feedback. In particular, if you already have experience with integrating cycling into a specific TEN-T project or campaigning for it, please share it with us! We are interested in examples of both good practice, such as the integration of a cycle highway into a railroad upgrade project, and bad practice, such as a missing cycling track on a TEN-T bridge.