After three years of successful cooperation, the AtlanticOnBike project for EuroVelo 1 – Atlantic Coast Route concludes at the end of the year. On 28 and 29 October 2020, the project partners joined the sixth and final project meeting online.

Funded by the EU Atlantic Area Interreg programme, the AtlanticOnBike project aims to develop and promote EuroVelo 1 – Atlantic Coast Route, the longest route of the EuroVelo network running along the continent’s coastline from the north of Norway to the south of Portugal totalling over 11,000 km. Originally planned to take place in Anglet in France, the project partners met online for two days to discuss and celebrate the developments and successes of the project over the last three years and to look ahead. Many speakers expressed they were looking forward to meeting in person to repeat the lively discussions of previous gatherings. However, meeting online allowed over 70 participants to join the seminar this time.

Each project partner presented the progress of the activities they were responsible for. Overall, the project was perceived to be a true success. ECF’s co-CEO Jill Warren commented: “Despite being a very attractive route, EuroVelo 1 has not received as much attention compared to other routes. Thanks to our partners, this has changed in the last three years.” The attractiveness of the route was highlighted in this video portrait of EuroVelo 1. Among other positive news, a new Esterbauer guide was announced that covers the whole route. The guide will be available next year in English.

An important aspect of the development of the route was monitoring processes to identify key issues along EuroVelo 1 and to gain insights into how the route is used as well as into its economic impact. To do so, an impressive 5,200 km, almost half of the total route length, was surveyed as part of the project. Positive findings from the survey include the 70 % share of low traffic and traffic-free sections of the surveyed route. And while 81 % of the surveyed route already comprises infrastructure that is perfectly rideable or well rideable, the survey enables the partners to identify those sections that have still potential for improvement. The insights the survey provided have already proved to be useful in the development of a French action plan with about 700 actions worth several million euros in potential investments and a plan to build a cycle path between Carrapateira and Alzejur. 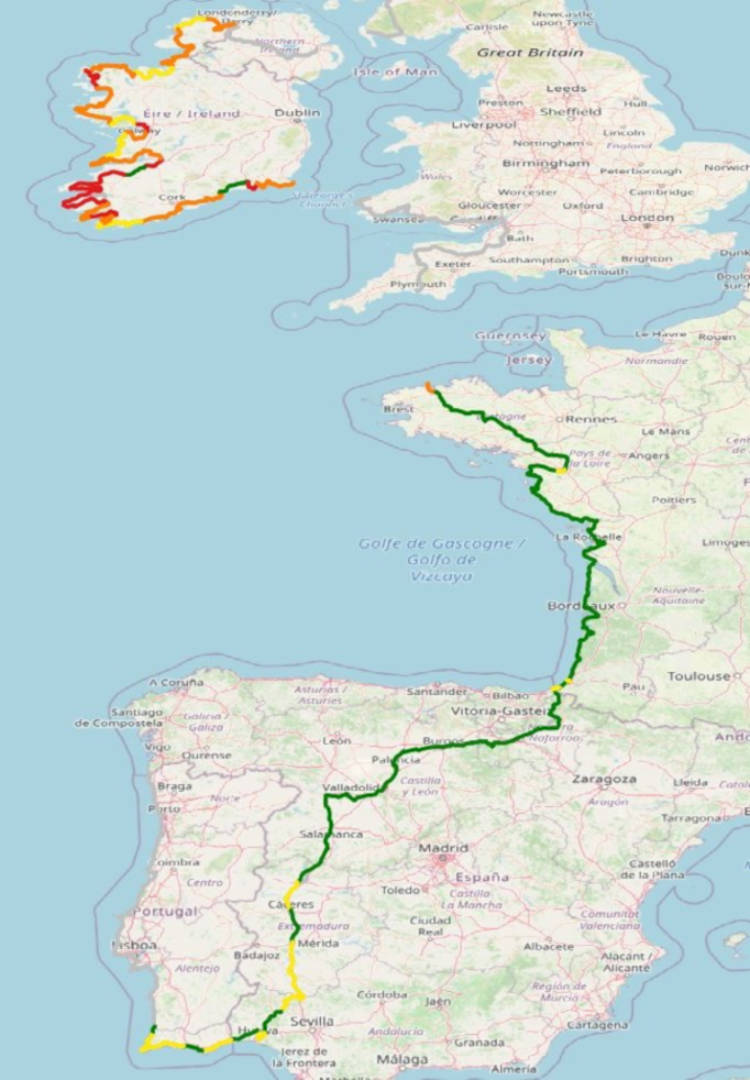 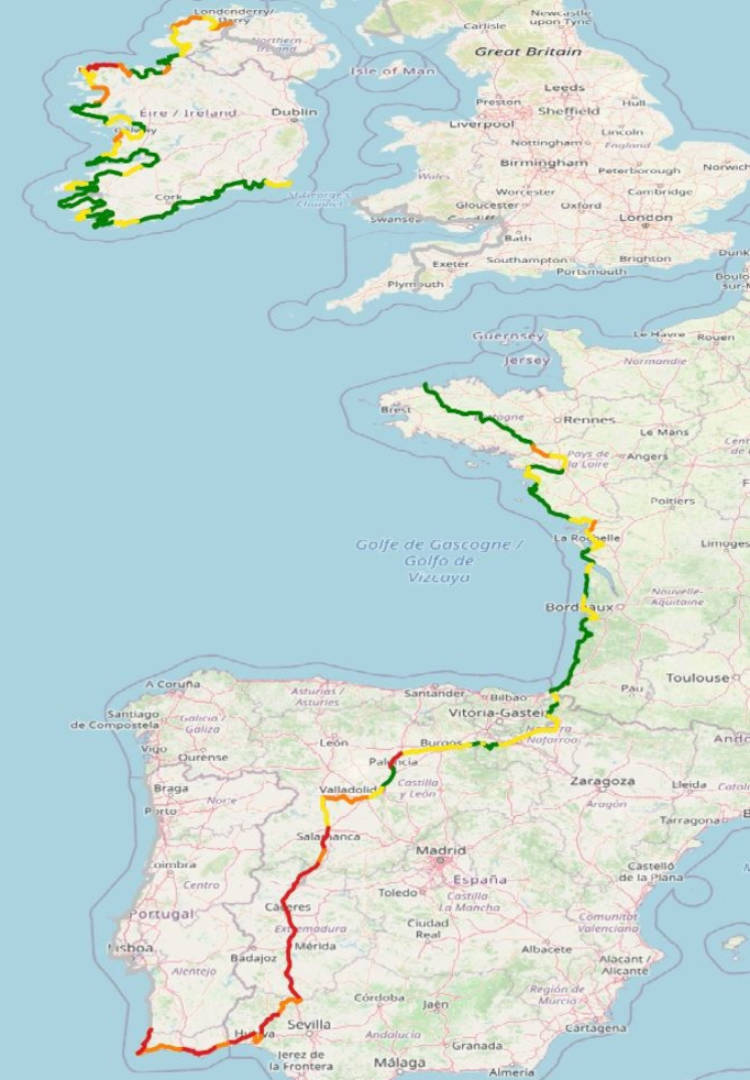 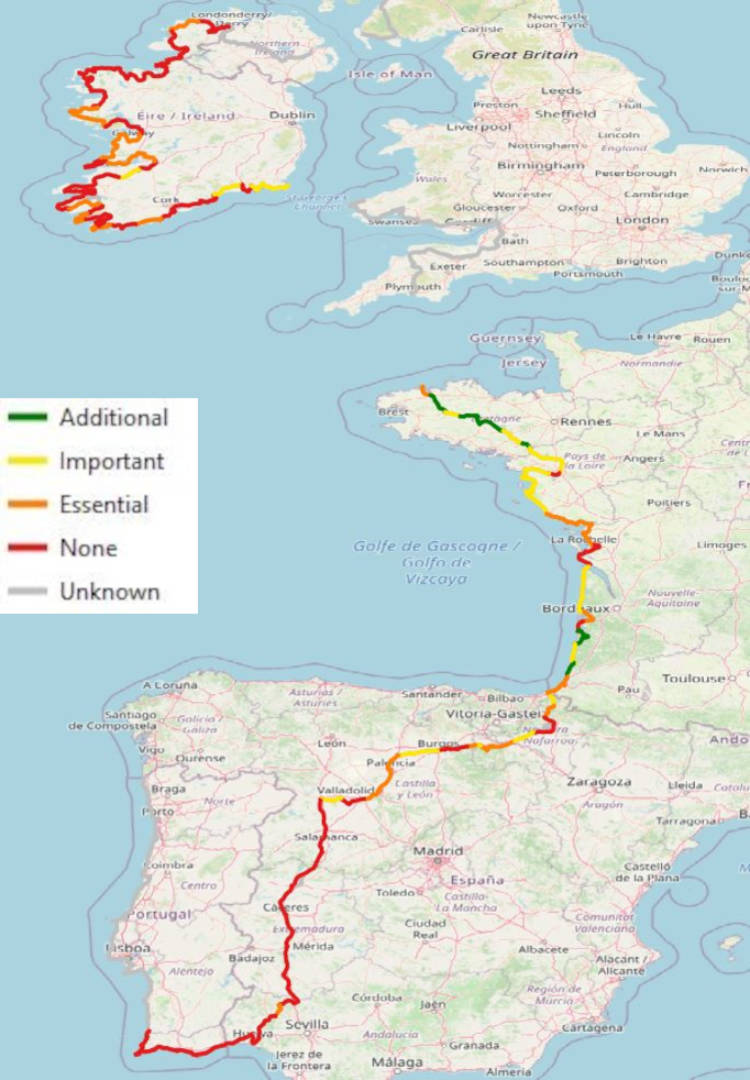 Each daily section was categorised based on its share of low / very low / no traffic (left map), on its share of perfectly / well rideable surface (middle map) and on its overall quality level (right map)

In addition to the survey of the route, a user survey among over 13,000 cyclists on EuroVelo 1 revealed that for 82 % of the participating tourists, cycling played an very important (24 %) to extremely important (58 %) role in the destination choice of their holidays. Moreover, based on the findings from the surveys, a demand map could be drafted showing the estimated usage of the route. Overall, the economic impact of the route has been estimated to be 198 million € per year.

The project partners will continue the fruitful cooperation after the end of the AtlanticOnBike project by collaborating on a long-term management agreement. ECF’s president Christophe Najdovski welcomed the commitment of the partners to continue working together: “I am very happy that five countries will be joining forces in developing and promoting EuroVelo 1 – Atlantic Coast Route, and I am looking forward to a future of healthy cooperation. Together, let us ensure that EuroVelo 1 becomes a reference for cycle tourists all over the world!”

Proud of what has been achieved within the Atlantic on Bike project, the ECF thanks all project partners and looks forward to continuing the successful partnerships in connection with EuroVelo 1.